Once there was a meerkat called Sammy.  His favorite thing to do was play meerkat rugby.  How you play is you run up and down the pitch, looking for food and when you find some you try to place the food on the try line.If you do this, your whole team has to eat it in 20 seconds.  If this happens, you score a try.  So, when he was playing, the rest of the meerkat tribe moved to a different place in the desert, because the snake king was coming near.  The ninja meerkats went out to stop them, but they hadn’t come back yet, so no-one knew what was happening.  Sammy arrived back at the burrows but no-one was there.  He ran about with his friend but even their young eyes could not see them!  But suddenly Sammy’s friend, Laval, saw a snake rising to strike them! He let out a warning yelp and fell off his perch! The snake slithered towards him, but suddenly Sammy appeared with his teeth bared, and the snake shot away like a bullet from a gun, but guns hadn’t been invented, so they didn’t know that.  “I think we should go,” said Sammy. “It’s not safe here.” So the two meerkats began their journey.

After a few days, the meerkats started to get tired. Their pace slowed, and they were thirsty. But one day, just as the sun rose, Sammy and Laval heard a loud chant and saw a terrifying sight. The snake army was heading their way. “Look for some boltholes,” Laval said to Sammy. So they rushed around but found no boltholes. Just as they gave up hope, the ninja meerkats sprung out from under a log. “Quick!” they shouted. “Get down the hole!” As the ninja sprang into action, Sammy and Laval raced down the burrow. “Look,” whispered Sammy. “Explosives! If we put them under the snakes, we be making a massive hole, so they are stuck!” “Great idea!” said Laval, and they set to work digging holes for the explosives. Then Laval yelled out “Bolthole!”  The ninja meerkats dived for cover, just as the explosives went of. The snakes fell down the hole, and were trapped. Sammy and Laval climbed out of the hole, and were congratulated by all the meerkat tribe, who had just arrived.

And they lived happily ever after.    The End. 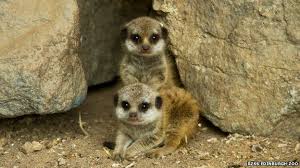 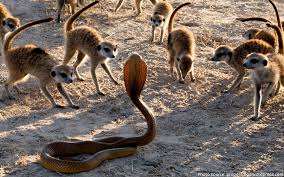